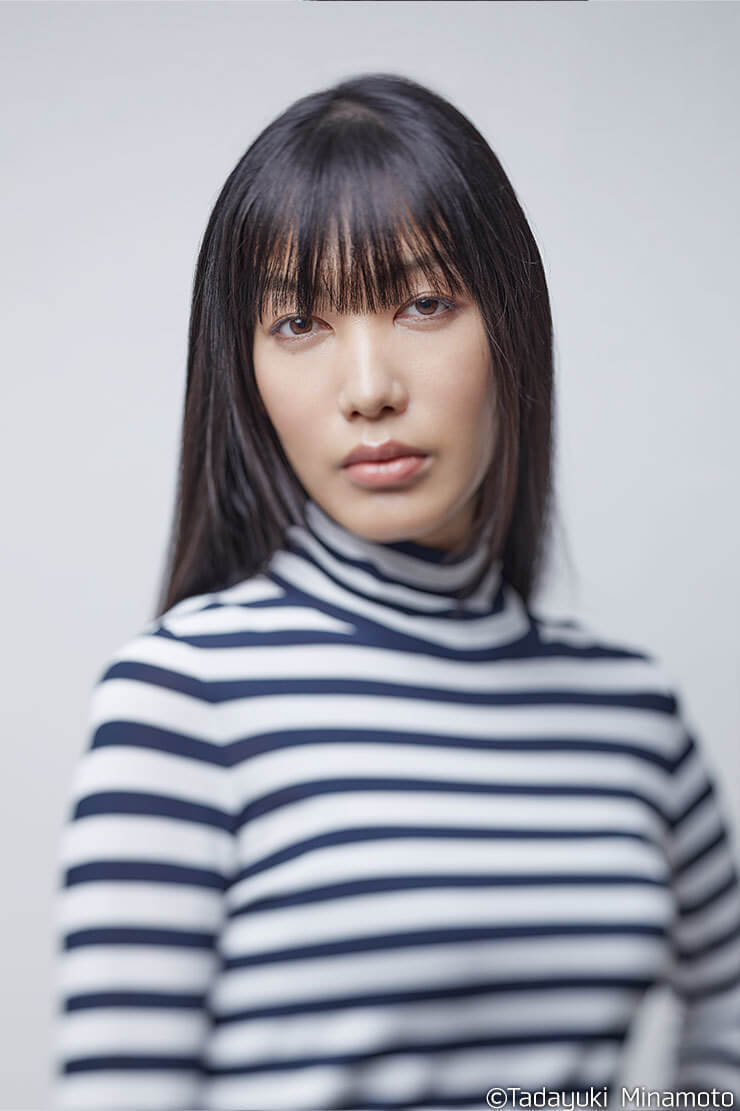 Ataru Nakamura taught herself to play piano when she was 10 years old and began writing songs at age15. She started to work as a street musician in the third grade of her middle school (equivalent to the 9th grade in US). She then dropped out of her high school.

The name of Ataru Nakamura appeared in public as a song writer when her song, “Tomodachi no Uta (Song of Friends)”, was picked up in the album “Natural” of Hiromi Iwasaki, a prominent veteran popular singer, which was released on 2/22/2006. Just a few months later, Ataru made her major debut with her single, “Yogoreta Shitagi (Stained Undies)” on her 21st years birthday on 6/28/2006.

She also made her debut as a stage actor by playing the role of a Diva in “Yuga na Himitsu (Graceful Secrets)” on August 11th through 13th of the same year.

In September 2006, she released her own version of “Tomodachi no Uta”, which was a huge success. The song is about the sensitive state of the mind being so fearful of expressing love, that she had to retreat and settle for friendship. After this song, Ataru came out as a transgender female. In the following October, she drew a lot of attention publicly by playing the role of a character who gets over gender identity disorder in the TV drama “Watashi ga Watashi de Arutameni (To Be Myself)”.

In January 2007, she released her first album, “Ten Made Todoke (May It Get to Heaven)”. Although her musical enrichment with both jazz elements and the mid-Showa-era (1960-70’s) popular song-ish style won critical acclaim and made people feel her sense of maturity, she actually wrote these songs between her mid-teenage to twenty years old.

In the same year, Ataru performed the role of Yitzhak in the rock musical “Hedwig and the Angry Inch” in Tokyo between February and March. In December, she released her 2nd album, “Watashi wo Daite Kudasai (Please Hold Me Tight)”, which consists of songs along with the time flow of one night, including two main singles released before the album, “Ringo-Uri (Apple Vendor)” and “Hadaka Denkyu (Naked Bulb)”.

The transition from “Ringo-Uri”, which dramatically expresses pathos, to “Hadaka Denkyu”, a song with peaceful warmth, seems to project her process to overcome the psychological struggles she went through after she gained intense media attention due to her coming-out in the previous year, and at the same time, it proves her ability to produce/present herself in wide-range of musical genres.

She further demonstrated she was worthy of the acclaim she was receiving in the main stream by performing at the 58th NHK Kouhaku Utagassen, the biggest musical TV event of the year in Japan. She also played a musical, “Botan-Dourou (Peony Lantern)”, in France in the same December. In the following year, January 2008, the musical made a triumphant return performance in Tokyo. Ataru also performed a recitation in a reading play “LOVE LETTERS” in July.

In her 3rd album released in February 2009, “Ashita wa Haremasu Youni (May It Be Sunny Tomorrow)”, Ataru featured Takamune Negishi, a prominent musical arranger, in a suite of four songs to introduce the richest rock&roll approach she had ever made, and struck a new chord with development in the instrumental execution and variation in the rhythms. She also acted a heroine role and sang the title song as well in the play “Gasu-Ningen Dai-Ichi-Go (Gas Humanoid #1)” in Tokyo later that year.

Ataru transferred her record contract to Yamaha Music Communications from avex trax in 2010 and released an album “Shonen Shojo (Boys and Girls)” in September. The album won an Award of Album Excellence at the 52nd Nippon Record Taisho, equivalent to the US’s Grammy Award. In the album, she received help from the arranger Takamune Negishi once again and used tunes of progressive rock and rock opera. In the song “Dokuhaku (Monologue)”, featuring Masami Tsuchiya with his funky rhythm guitar, Ataru adopted a spoken-word vocalism.

In 2011, the 5th year as a singer, Ataru simultaneously released an anthology album “Wakage no Itari (Whim of Youth)” and a self-cover album “Nibansenji (Second Brewing)” on May 11th. The latter album packed the songs she had written for other singers like Keiko Toda, the Stardust Revue, Jero, Saori Yuki, which she re-recorded in new arrangements by Negishi and herself. On the other hand, in July, she took a role and supervised music in a play “Nippon Musekinin Shin-Sedai (Japan’s Irresponsible New Generation)” written and directed by Hirohito Goto, who knew her as a director of “Gas Humanoid #1″. This play was dedicated to the sufferers from the Great Earthquakes of Eastern Japan of Mach 2011 as a charity performance. Ataru also expanded her activities with taking charge of musical accompaniment in the play “Shinsetu Hakken-den ~Murasame-Kitan~ (The Eight Dog Chronicles; the deep version of the Murasame strange tale)”.

Ataru released the 5th original album after an interval of 19 months, “Kikoeru (I Can Hear)”, in April 2012 with an acclaimed producer Masanori Sasaji. The theme of this album is “Datsuryoku (easing yourself)”, which was what she felt as a knack to proceed to the next stage since she felt she had put too much effort in the songs she had produced in past five years. She also felt this was true at the time for Japan which was overwhelmed by the quakes and struggling to find new hopes. The new songs in this album are predominantly filled with healing gentleness and serenity, and especially the last number, “Yami no Man-Naka (the Very Center of the Darkness)”, contains deep cleansing power in the danceable four-on-the-floor programing.

In 2013, Ataru was the music director and accompanied herself on the piano and the songs in a play “Kyoju (Professor)” based on a story written by one of the most famous authors in Japan, Hiroyuki Itsuki. She also composed a song “Good-Bye; a Love Song” and “Usuzumi no Sakura (Cherry Blossoms in the Color of Thin Ink)” with Mr Itsuki’s lyrics.

Since Ataru Nakamura has expanded the scope of the creative activities beyond genres and generations, it is hard to get a full picture of her at any one point in time. However, you can see the reason why so many other creative artists are enchanted by Ataru’s performances once they work with her either in the musical field or the theater or the both, when you touch the power of penetration and conviction which she has gained through the long and struggling search for her self.